The materials that are chosen and used in a passive solar building should be chosen for the object’s inherent ability to conduct and radiate heat.  Many passive solar houses also use natural convective movements within the air or water to better control the flow of heat.  As such, it is important to understand how heat moves.

Heat is in constant motion.

Heat moves to constantly try to reach equilibrium and will constantly move from warm to colder areas. When the door is opened to a cold winter evening, heat will move out of the house while the cold sweeps in. Similarly, when reaching for the ice cream and the freezer door is open, heat moves in, as cold air rushes out. In regard to both the building and the freezer, the presence of insulation functions to keep areas warm or cool areas stable.  In buildings, it is desired to live within a constant, comfortable temperature, regardless of the temperature outside of the building.

The economical solution to a warmer house in the winter and a cooler house in the summer is to insulate it well, and have a basic understanding of the movement of heat.

Heat moves from warmer to colder areas through these main types of movement. 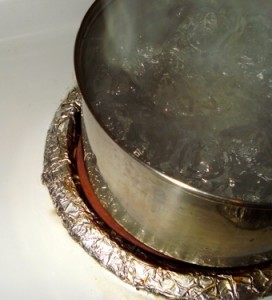 Conduction – Conduction is the movement of heat as it travels through solid objects.   Heat energy travels as it is transferred from molecule to molecule. The more dense an object, the faster heat moves. Conduction is illustrated in the process that takes place when heat travels from an electrical burner, through a pan, to heat the water inside of the pan.

In passive solar design, heat is absorbed in the building’s thermal mass.  The object with thermal mass is usually a dense material like a cement, tile, stone or water. Objects with this ability to conduct heat are usually located in the floor or walls of the building. In the winter, the sun’s is heat energy is absorbed, then spreads through the thermal mass by conduction.

Convection – Convection is the movement of heat circulating through an air (gas) or liquid. Warm molecules rise. Convection is illustrated within a building as warm air rises, the second story of the building will often be warmer than the basement, located at the bottom of a building. Likewise, in a liquid, warmer water will circulate toward the surface. Some passive solar buildings use strategically placed windows or fans to circulate warm and cool currents of air throughout the house.

Radiation – The sun’s radiant heat energy moves through space as an electromagnetic wave. When it strikes a large object like the Earth, the radiant heat is absorbed in the mass of the large object. Although the space that radiant heat travels through can be quite cold, the heat is not absorbed until it hits a dense object. A microwave operates on a similar principle: The contents in the middle of the microwave absorbs the radiant heat and gets hot, while the surrounding air in an of itself does not. When something in the microwave is hot, the heat is coming from the heated object, not from the air.

After the heat is absorbed, with will release the heat energy back into the surrounding environment.  Food that has been heated in the microwave is radiating the heat that it previously absorbed.  The cement floor that has been hit by sunlight all day will radiate the heat that it absorbed.  The difference between the food and the cement floor is the density of the materials.  The food with quickly get cold, while the floor, because of its mass and density, will continue to release its stored heat for hours.  Passive solar design relies on the use of materials with thermal mass within the building that can radiate heat.  It also relies on materials that allow the heat energy to be absorbed. 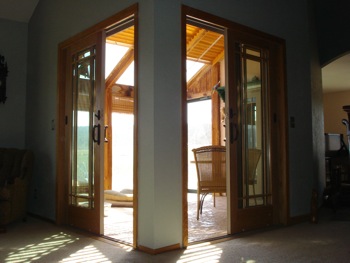 The sun room absorbs the heat energy, from there, it can radiate out to warm other parts of the house

In the winter, warmth is generally desired.  When materials with thermal mass are well placed so that the sun’s energy and heat can shine on them, they will absorb the sun’s heat and act much like a large rechargeable (heat) battery. The heat stored up through the day is released into the building to warm it through the evening and night.

Because of the planned placement and design of the building to its surrounding environmental elements, a well designed passive solar house will be warm in the winter and cool in the summer. If a house, regardless of its aesthetic design, is not well insulated and allows heat to escape through various cracks in walls, windows, doors, or other vents, the house will reach an equilibrium with the temperature that exists outside of the house much more quickly.