Many people are looking for alternative energy sources and sustainable ways of heating and cooling buildings both for economical and philosophical reasons.   Traditionally used fossil fuels like natural gas, propane and gasoline are becoming more difficult to extract, their price can fluctuate wildly, and the impacts of mistakes and miscalculations in their extraction can be widespread and disastrous.

Here are sustainable, renewable and alternative energy sources.  This section will be built up to incorporate more information on the following: 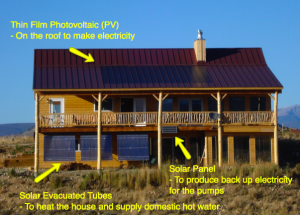 Active Solar – The term “active solar” includes the action of pumps, fans and/or inverters that convert solar-based electricity from DC to AC. Because of the addition of electrically driven components, it is called “active solar” and can include any photovoltaic (PV) solar panel, thin-film PV, solar evacuated tubes for heating or anything else that converts, pumps, or motors anything.  See how active solar can be attached and work in a grid-tied house.

Geothermal – Geothermal energy utilizes the relatively stable temperature of the earth that is buried and stored a few feet under its surface. Geothermal energy can potentially be harnessed in the front or back yard of your home.