How does geothermal heating and cooling work?

Geothermal energy utilizes the relatively stable temperature of the earth that is buried and stored a few feet under its surface. Geothermal energy can potentially be harnessed in the front or back yard of your home. 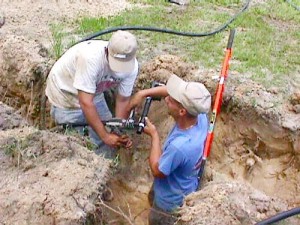 The geothermal loop, one aspect of geothermal, is being installed in the ground. Courtesy DOE – NREL

Geothermal energy is harnessed from the earth.

One of the three main aspects of a geothermal system, is the series of pipes that are buried in the ground. These pipes store and transfer the relatively constant temperature the lies under the surface of the ground.

Regardless of the season or the degree of the outside temperature, the temperature of the earth a few feet underground remains constant.  Where I live in Western Colorado, this temperature is 56 degrees Fahrenheit.  This can differ depending on the latitude and climate of your specific location.

Over time, a substantial energy saving can be gained by using geothermal energy to heat and cool a building.  This is because energy is not used or burned to produce heat, instead, energy is used to move heat through a system. 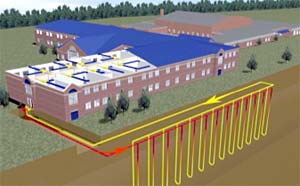 Diagram of a geothermal loop located underground – Courtesy of tva.gov

Both large institutions as well as smaller private residences can benefit from the utilization of geothermal energy as a heating and cooling energy source.

(Side note: Geothermal energy is an extended beneficiary of the passive solar element of the Earth’s ability to store and absorb the sun’s heat in its large planetary mass. Thus, theoretically it can be debated as an extension of passive solar heating and cooling.)

There are the 3 main components of a geothermal system:

1. The Loop
The loop is located outside the building, typically buried in the ground. The loop houses a liquid that absorbs the energy of the stable temperature that exists underground. A liquid, usually water or water blended with a refrigerant (glycol antifreeze solution) runs continuously through the entire length of the loop. The geothermal loop can be installed in a vertical or horizontal orientation (see below). It is usually composed of a type of high density polyethylene pipe. 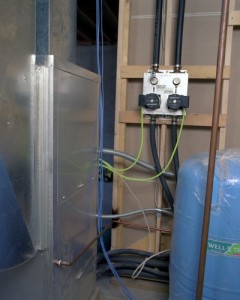 2. Geothermal Heat Pump
Also referred to as a ground source heat pump (GSHP) it is located within the building and transfers or utilizes the heat energy from the warmer or cooler temperature of the liquid solution coming from the loop to heat or cool the house.  Because it is transferring energy from a stable temperature (58 degrees) in the winter, when the air outside the house is cold, the heat pump pulls the warmer temperature that is gained from the ground and uses it to heat the building. (This is possible because all temperatures above -200 degrees Fahrenheit carry heat. While -200 degrees Fahrenheit sounds very cold to me, heat can still be extracted from temperatures above that amount. Luckily, the temperature of the ground being utilized for geothermal is well above that threshold.)

In the summer, when the outside air is hot, the loop provides a place for the warmer temperature to be discharged.  By the time the solution has run through the extent of the loop, it has been cooled and returns to cool the inside temperature of the house.

The geothermal heat pump functions similar to how a furnace functions, for example, it transfers the heated or cooled air from the loop to the duct work of the building.  Its filter also needs to be periodically replaced.

3. Distribution System
This is the duct work within the building that distributes the heated or cooled air throughout the building.  In contrast to a forced air system that periodically disseminates blasts of air, a geothermal heating or cooling system is constantly pumping air.

Option to add to the system – Hot Water Heater

A “desuperheater” can be added into a geothermal system to heat domestic hot water.  In the summer when heat is being drawn from the house, the heat can first be discharged in the domestic hot water heater before it otherwise would be dispelled in the ground loop. 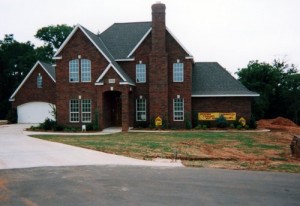 While geothermal heating and cooling is more energy efficient than a traditional forced air system, the cost of installing a geothermal system can cost significantly more. The extra cost spent up front, however, can be returned in the years that follow.

“Even though the installation price of a geothermal system can be several times that of an air-source system of the same heating and cooling capacity, the additional costs are returned to you in energy savings in 5–10 years. System life is estimated at 25 years for the inside components and 50+ years for the ground loop. There are approximately 50,000 geothermal heat pumps installed in the United States each year.” 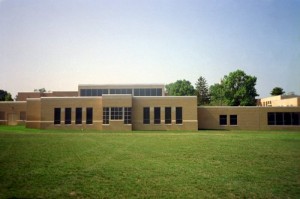 It expects to save $400,000 in energy and maintenance costs over the next 20 years. Choptank Elementary School was the first school in Maryland to use a GeoExchange system.

The school is supplied by 41 ceiling-mounted GeoExchange units located above the classrooms and hallway ceilings. Three other units supply the gymnasium, cafeteria, and small conference rooms. The ground loop is buried beneath the school’s playground. It consists of 1-inch diameter pipes sunk in 100 vertical boreholes, each 275 feet deep. The system’s heating/cooling capacity is 157 tons.”

The geothermal loop system is often installed vertically or horizontally. The decision to use a vertical or horizontal loop lies in the area of land that is available to encase the loop. In order to install a horizontal loop, it is said that there should be at least 1 acre of land available. Less land area is needed to install a vertical loop. The vertical loop can have pipes run at 3, 4 and 5 feet under the ground.

Here is a basic diagram of a horizontal loop, diagram courtesy of DOE

Most of the geothermal loop systems installed are closed loops.  T

his means that the water – antifreeze solution is within the closed system of the loop.

A closed loop system can also be installed within or near water, because a large body of water will also have a constant and stable temperature.

Water can also be utilized as the stable temperature energy source, diagram courtesy of DOE

Open loop geothermal systems can incorporate water from an outside source. These types of systems must also have an additional layer of filters installed and are not recommended for residences.   If water is used, it must be in an area where the bottom layer of liquid does not freeze.

After a geothermal system is installed, the residence usually disconnects propane or other type of heating.

Less land is needed for a vertical loop, diagram courtesy of DOE

Electricity is still needed to operate the heat pump. The overall electricity usage and hence cost associated with electricity will typically rise, but will tend to be a lower amount than the original cost paid to the previous utility. 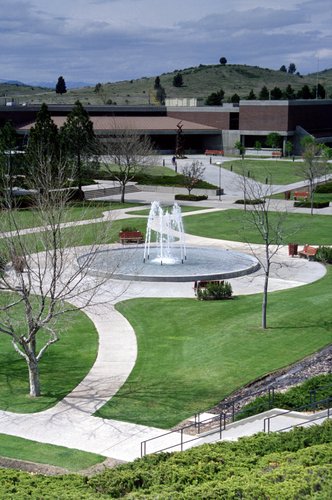 One of the first large scale geothermal applications at the Oregon Institute of Technology. Courtesy DOE-NREL, credit: Mary Smothers

“The Oregon Institute of Technology has been using a geothermal district heating system since 1964, making it the first modern system. Today, the system heats 11 buildings (600,000 square feet), provides domestic hot water, melts snow on 2300 square feet of sidewalk, and even cools five buildings (277,3000 square feet) during the summer. The district heating system saves around $225,000 each year in heating costs, as compared to the previous fuel oil boiler system.”

Other Notable Snippets on Geothermal Energy

The terminology of geothermal can be confusing because it has been used to refer to any type of energy obtained from under the surface of Earth, thus geothermal can refer to hot springs, which are located intermittently throughout the world, or can refer to the harnessing and utilization of the constant relative temperature of the ground to heat and cool buildings.  The information in this article dealt with harnessing the stable temperature of the ground for geothermal energy.

Before installing geothermal, it is recommended to make sure that the building is properly insulated.

The overall size of the loop depends upon the average kilo watt hour (Kwh) energy usage of the building.

Geothermal does not create any surplus of energy for a grid-tie in situation, whereas active solar can generate surplus energy.

Geothermal energy relies on electricity to power the heat pump.  If there is an electrical power failure, unless a type of back up electricity is installed, the geothermal heating and cooling system will stop working.

The costs for installing geothermal are significant because of the amount of piping for the loop that must be installed in the ground.  Costs for upkeep of a geothermal system are minimal, however, it is a possibility that a leak could occur within the loop.  Geothermal, however, is a renewable and sustainable energy source that relies on the constant temperature of the earth.

Thank you to the Delta-Montrose Electric Cooperative for answering my questions about geothermal. DMEA has a program called GeoExchange that helps with the installation of geothermal heat and cooling pump systems for their members.

Geothermal, along with passive and active solar, wind, ocean – wave, hydro and biomass are different types of potential energy sources that can be harnessed as a more sustainable and renewable energy sources.